Whenever anyone says, “trust me,” or “honestly,” or “to tell you the truth,” they are lying. I know this now, but on a very hot June day in Cairo outside the National Egyptian Museum, Dr. Moses looked quite official with his white hair, laminated nametag, and clipboard in hand. 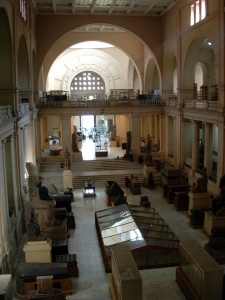 “I work at the American University of Cairo,” he continued, “and can be your guide inside the museum for sixty Egyptian pounds.”

This was much cheaper than the group tours of the museum, and as most of the exhibits were not explained in English, I figured that ten bucks was a decent rate for a two-hour lesson in the country’s foremost archaeological museum. Plus I was a guide in Paris at the time, and knew you could learn a lot in a museum with the right person. I shook the hand of Moses, and my boyfriend Joe and I entered the giant building.

Dr. Moses led us through halls of alabaster jackals, past statues of scribes with crystalline eyes, around rooms full of stiff mummies, by the intricate throne of Tutankhamen, and around the mask of Akhenaten. I had seen exhibits of Egyptian artifacts before, but not in this abundance or array. 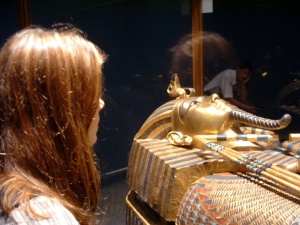 What would be a highly touted roving exhibit in the U.S. was pushed into the corner of one room of one hall of one side of this enormous museum. Dr. Moses, true to his word and his namesake, told me the stories behind the silent stone sarcophagi, which important displays were often overlooked, how to discern the gods and pharaohs from one another, and how the whole collection came to be. I was soaking it all in, thrilled with my budget guide and all the awesome stories I was learning.

And then he took me to his brother’s perfume shop across the street.

Dr. Moses continued on with his lessons, as if the tiny store with two-way mirrors was merely an extension of the world’s greatest collection of ancient Egyptian artifacts. “Lotus oil, worn by Cleopatra, is only produced in Egypt. Amber is the most sensual of all fragrances, and clove was used to anoint embalmed bodies.”

Dr. Moses’ brother just kept staring at me with bug eyes; things were beginning to feel a bit weird in the plush red velvet room and I started to imagine my embalmed body, smelling of the finest patchouli and sandalwood. I was growing ever more uncomfortable amidst the bottles of perfume oil on their glass shelves, sparkling like stolen diamonds.

Was the tea we were continually being served drugged? Did Dr. Moses and his fraternal conspirator have evil aspirations beyond selling some kids a few vials of perfumed oil? I whisper my suspicions to Joe, who replies with a chuckle over my paranoia- so typical of a green traveler like myself.

“Just finish your tea, buy some Lotus oil for your mom, and let’s get the hell out of here,” he said. 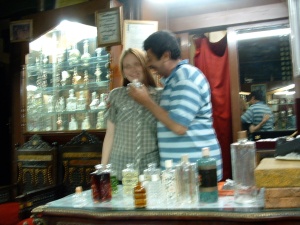 So I forked over what was probably way too much money for a small “unbreakable” vial (“It will NEVER BREAK!”) of the purest perfume oil this side of the Nile River. Dr. Moses’ brother was quite crestfallen that I had not bought a whole liter of lotus essence, but after many a la shokran (no, thank you) we were finally granted leave and said our goodbyes to the brothers. Joe patted our new friends on the back and we left the jewel box store.

Dodging donkey carts and squealing taxis we made our way back to the hotel. Feeling a little bit stupid and a lot American, I apologized to my travel partner for imagining things.

“You weren’t,” he said. “When I said goodbye and patted the brother on the back, he had a gun strapped to it.”

In shock, I dropped my unbreakable vial of perfume oil. It broke.