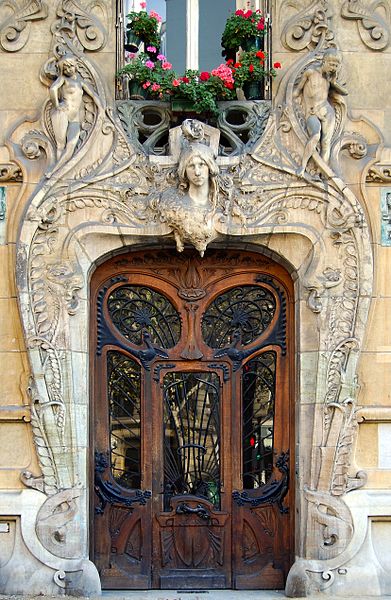 On your travels in Paris you will no doubt hear the term Belle Epoque (pronounced BELL EH-POKE) used to describe various forms of art and architecture.  La Belle Epoque means ‘Beautiful Era’ in English and should bring to mind decadence, prosperity, and pleasure: imagine artists drawing can-can girls, inventors constructing grand palaces, and writers with wine in hand attempting to capture the liberal, bohemian spirit that infused Paris and captivated the world.

The Belle Epoque was a time of peace between two wars, the Franco-Prussian War and World War I, and dates from the late 19th century to 1914.  France was living in harmony with its European neighbors and every day brought a new innovation in industry and the arts.  This period of peace and ingenuity is also sometimes referred to as the fin de siecle (turn-of the-century) or the Third Empire.  The “golden age” was made possible by Emperor Napoleon III, nephew of the original, who ruled just prior to the Belle Epoque.  He had already overseen the massive overhaul of a gritty, medieval Paris into the well planned arrondissements and broad boulevards we love today.  And just as the Emperor had political control, his wife the Empress Eugenie had a fresh form of influence: social power, and she helped to create the need for luxury items and conspicuous consumption.  Haute couture fashion was born, and the stage was set for a new era.

After the end of the war with the Prussians, the burdens of life seemed to lift a bit and more important changes and new building projects were in store for Paris.  The Parisian subway system the Metropolitain ran for the first time, and colossal projects like the Grand Palais and the Petit Palais were erected for the World’s Exhibition.  Lavish hotels like the Ritz and the Crillon opened their doors, as did the jeweler Cartier and other dealers of decadence.  The most notable addition to the city during the Belle Epoque was the Eiffel Tower which was soon to become an unmistakable denizen of the Paris skyline (to the horror of the Parisians who at first dubbed it le monstre metallique, or the metallic monster).  At this time anything was possible, and the new structures made the point that humans had the power to affect their environment, particularly with gobs of iron and glass.

The Belle Epoque was also an era of political upheaval and cultural changes in France, with working-class agitation and socialist movements on the rise. These tensions just made the city sizzle even more as Parisians headed out Friday night to enjoy the new inventions of the time: to watch the cinema, whoop at the can-can, be enraged at the Russian ballet (quite the scandal), ride in motorcars, talk on the telephone, and sneak away to the cabaret or the café-concert.  These new ideas provided fun and distraction for a populace which increasingly needed them, as it was a time where everything seemed up in the air.  Old ways were slowly fading and a new, confusing world was stepping in.  The Belle Epoque eased the birth pains of the radical social and cultural changes in store for France and the rest of the world.

One way of grappling with the uncertainty of the modern world is through the creation of art, and during the Belle Epoque art not only thrived but went BOOM! BANG! CRASH! and was changed forever.  The movements of Impressionism, Cubism, Surrealism, Dadaism, and Art Nouveau took painting and sculpture a step beyond reality- and never went back.  Renoir, Degas, Utrillo, Toulouse-Lautrec, Dali, Picasso, Van Gogh, Seurat, and Mucha are just a few artists associated with Paris around the turn of the century.  Never before had the world witnessed such a profound collection of creative geniuses, all living, working, and wandering the streets of the same city.

If Paris was the epicenter of the artistic, musical, and literary world during the Belle Epoque, the neighborhood of Montmartre was the very core.  Still just a village on the outskirts of Paris, Montmartre was not subject to the same taxes on wine, women, or song, attracting countless artists, composers, dancers, sculptors, writers, and drunks.  The result was a rich Bohemian culture of the right-brained, living an easy life in cafes and cabarets that night after night smoked with music, poetry, art, and humor.  Groups of poets like Le Chat Noir (The Black Cat) met to expound on the nature of the universe, Toulouse-Lautrec drank absinthe and painted dancing girls like Jane Avril at the Moulin Rouge, and Van Gogh bummed around the neighborhood selling nothing and drinking at the Lapin Agile.  Picasso traded a painting for a day’s meals on Montmartre, and invented Cubism at the Bateau Lavoir studio.  Though much of Paris was prospering, those on Montmartre were just trying to get by the best way they knew how, creating art through painting, writing, and dancing.  The quarter took on a life of its own, refusing to calm down and cooperate and thus establishing a unique setting where the unrivalled creativity of the age could play itself out.

Moments in time like the Belle Epoque are not meant to last, and just as the Basilica of Sacre Coeur was completed on Montmartre, the horrors of World War I overtook France and the era came to a close.  However the free spirit of the age still resonates in the streets of Paris today and can be discovered by any artist wannabe or bohemian-at-heart.  You will find it as you run through the gray Paris rain laughing, on a tiny crooked sidewalk table, wandering adrift along Montmartre’s twisting paths and long staircases.  In Paris, as in life, sometimes you see the best things when you are lost.  You may come across the essence of the Belle Epoque, and you could even find yourself- spouting poetry, sketching in your journal, or dancing the can-can.