I write from the one internet café on the island of Moorea, Tahiti’s sister island. I am in paradise- don’t hate me! However you probably wouldn’t even recognize me as I morphed

into island Shilo (like island Barbie but much smarter) about twenty minutes after I got here: no makeup, no jewelry, and no shoes; time and schedules mean nothing, I haven’t brushed my hair since I arrived, I shower only to wash off the salty South Pacific, and wear just a swimsuit and a sarong. I have been camping on the western beaches and spending my days exploring every inch of the volcanic isle by means of le truck, the local transportation. It is a flatbed pick-up truck which functionsas a bus but with no real stops; you just flag it down when you want to hop on and yell when you are ready to get off.

I thought Tahiti was the most beautiful place I had ever been until I got here. The water is fluorescent turquoise, the color of a blueberry slurpee or the blue stripe of a neon tetra 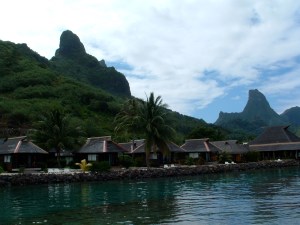 fish. Moorea is composed of jagged black volcanic peaks, like a shark got punched in the mouth, jutting up between two bays, one being Cook’s Bay where the Captain landed. The whole island is covered with dripping green vegetation, coconut and mango trees, and giant flowers in every color of the rainbow and then some. The soft beaches are whiter than my blindingly pale Anglo skin, streams undoubtedly lead to jungle-hidden waterfalls, and I hike through clouds to reach insane vistas of an

exotic world. It is surreal; a place this beautiful can’t really exist, right? I would think I had slipped into some sort of alternate universe if it wasn’t for Eminem blasting out of the speakers in this café, jolting me back to “the real world”. Ha!

Despite the Metallica hats in gift shops and the ubiquitous McDo, French Polynesia is thoroughly that- FRENCH. Outside of the sheltered five-star resorts very few people 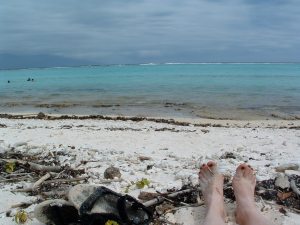 speak English and I have rarely heard the native dialect spoken, just a twice in the marketplace. The street signs, gendarmes, post boxes, radio stations (N-R-J!), cars, and grocery store brands (Leaderprice) are exactly the same as the ones in France. Along the waterfront in Papeete are sidewalk cafes with names like Les Trois Brasseurs with dark green plastic wicker chairs and tiny round tables that Paris would be proud to boast, serving a wide selection of French wines and excellent espresso.The result is a perfect little slice of French culture set in a background of sunny skies, bizarre tropical flowers, and seashell-covered beaches. I think I’m in love!

I am catching the last ferry tonight back to Papeete on Tahiti, THE nightlife hot spot of French Polynesia, to go dancing with my new friend Anika from Stuttgart who I met at a hostel and who has invited me to stay with her for next year’s Oktoberfest. Traveling alone you always talk to tons of interesting people; just today I have met a Tahitian mother of five whose brother works at a bar in Pioneer Square in downtown Seattle, the inventor of the over-water bungalow, and a friend of Marlon Brando named Muk. As a young American traveling solo, I feel a bit like the popular girl in junior high, instantly a bit hated and a bit cool at the same time. As a female traveling 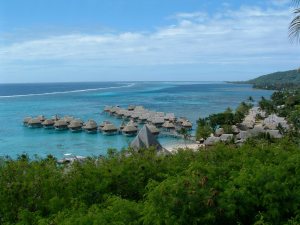 alone I find almost everyone here to be helpful; the men sometimes too much so. The women however offer me plenty of genuine advice and comfort with an interesting mixture of pity and envy. I am getting along just fine, staying safe, and relishing every moment.

Tahiti itself is awesome, the beaches are black sand and the waters as clear as the skies, the air heavy with the perfume of tropical flora and whichever island I am on I just can’t seem to wipe the smile off my face. Paradise of course is not perfect, a small order of fries at McDo is $4, it is about 100 degrees 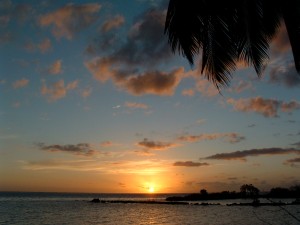 Fahrenheit with 100 percent humidity, I have dozens and dozens of mosquito bites on my legs, and there are families of wild chickens and gangs of scratch-happy dogs EVERYWHERE which sounds really cool until they simultaneously start going berserk at 2 AM. But if I ever drop off the face of the earth and can’t be found- you know where to look!

Keep traveling and slay those dragons,