Cafe near the Centre Pompidou

One by one the Parisians slowly come to a stop, pausing on their way to home to tiny apartments to watch as a slinky black wiener dog leans into the splashing fountain at Place Monge and rescues a floating leaf from the swirling jets of water. After a furious shake of the wide yellow leaf, he gently lays it down on the surrounding pavement and returns to the fountain’s ledge to save its brothers. Applause. The women smile, the children squeal in laughter, and the men chuckle to themselves. The citizens of Paris love King Louis XIV- not the illustrious Sun King, le Roi Soleil, who ascended the throne at age five, built the magnificent chateau Versailles, and ruled as France’s greatest king ever. No, this is le Chien Soleil, a powerfully cute miniature dachshund with silky black fur and soft tan markings, whose prancing spirit captivated the hearts of the French as no king ever could.

Louis at the Jardins des Plantes, before getting kicked out

I knew the Parisians had a love affair with those of the canine persuasion from previous visits to the city where I had witnessed dogs of every shape and size dining tableside at sidewalk cafes and poking their heads out of designer handbags on the Metro. When I transplanted my life to Paris, however, I found that I had greatly underestimated the puissance of a small sausage-shaped dog to help me acculturate to life in the City of Lights. After a few short weeks King Louis XIV became something of a celebrity in my Left Bank neighborhood. Greek sandwich craftsmen would hand him long strips of gyro meat, and in return the King would gladly tidy up the shop floor of any stray frites. Restauranteurs handed him whole meatballs to gobble up, and my Turkish friend Vulcan would set out a heaping plate of raw steak meat every time I passed by his brother’s store. On a tight budget and a diet of fried eggs and tuna fish, I glared in envy at my wiener dog as he chowed down the chunks of grade-A beef, then once again drew applause as he ripped apart a paper table napkin in delight for dessert. I went home to my omelet, wistfully awaiting “meat Sunday”. 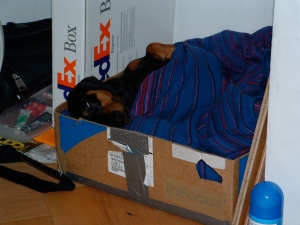 King Louis XIV went everywhere I did, in converted duffle bag with netting at one end that I dubbed the “What dog?” bag. Paris was his playground. He stared wide-eyed at the crouching lions of the Museum of Evolution, he strutted and preened down the Champs-Elysees like a teenager on Friday night, he perched on a stool at the famous Café de Flore, charming patrons and waitstaff alike. Louis loved Paris and Paris loved Louis. True, I did get kicked out of several gardens and parks (I assumed the “No Dogs Even On A Leash” sign was just a suggestion)- but the guards who gently reprimanded me always had a soft look in their eyes and a “quel joli chien” on their tongues. Nothing could stop Louis from romping Paris and winning hearts at the same time, running circles in parks and fetching tennis balls out of the cold waters of the Seine from the Ile de la Cite. His most cherished pastime, however, remained the aforementioned leaf-rescue operation which he performed in almost every splashing fountain in Paris, from Saint-Sulpice to the Gardens of the Palais-Royal, and always to a group of smiling Parisians.

During the deadly heat wave, Summer 2003

This image of happy, laughing Parisians may come as a shock to you if you have heard and bought the stereotype that Parisians are rude, cold-hearted snobs, but my experience with King Louis XIV proves that indeed they are actually TOO nice. They would fall over themselves to stop and chat about Louis, his age, his breeding prospects, the theatre, politics, the mirabelle plums at the market, and after a few months’ time I could hardly walk down my small street in less than an hour due to the many conversations that ensued each and every day. Michel de Montaigne, the famous French philosopher, exhorted his fellow humans to live like the dog, to “break the bone, and suck out the marrow of life”- to be passionate about every new day. This celebration of the enjoyment of life is on display all over Paris, from the abundance of lingerie shops to the national pastime of strolling to the three hour lunches of haute cuisine. In this way dogs and Parisians have much more in common than anyone might think, and just maybe we can all learn something from King Louis XIV and his beloved city, and take pleasure in the simple actions of life- to shake the leaf furiously, and go back for more.

5 thoughts on “King Louis XIV in Paris: The Short Tale of a Long Dog”