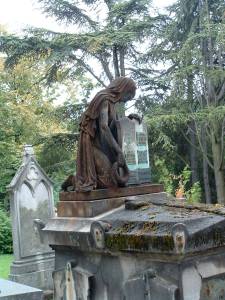 Nothing. Not a peep. Out of 70,000 tombs, crypts, graves, and urns in the Père Lachaise Cemetery in Paris, not a single ghostly shadow crept across my path; no cold breezes inked their way down my spine. It was Halloween and the moon was bright. I grew bolder:

“COME ON OUT! I WANT TO HAVE A SUPERNATURAL EXPERIENCE!”

Only the blowing leaves answered me as I wandered around my favorite éspace verte (green space) in Paris. Père Lachaise is not a graveyard. It is a sculpture garden, a decaying, crumbling ode to the ephemerality of life, the setting for a Gothic tale of terror. It is romance, like Venice is romance, with its crumbling walls and sinking streets. I go there to remember that it is the fleeting nature of life that makes it so impossibly wonderful. Père Lachaise is one of the world’s most famous resting places and like Studio 54, has a waiting list to get in. Even with a map it is easy to get lost, and I often spent my afternoons wandering around the labyrinthine acreage, stumbling upon the graves of admired poets, artists, and authors: Oscar Wilde, Gertrude Stein, Bauldelaire, Abélard and Heloise, Molière, and La Fontaine, plus hundreds of others. Père Lachaise is heaven for French art and literature nerds like me. 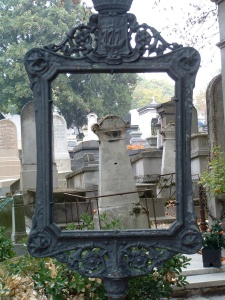 Statues of angels stare back at me with blank eyes. I had come to Père Lachaise this All Hallow’s Eve for one reason, to share a bottle of red with my favorite denizen of the dark, Jim Morrison. After tempting and taunting the various spirits and ghosts of the area, I wander towards Jim’s small marker and find him there as usual, still waiting for the sun. The bust on the tomb was stolen years ago, and now it is just this small rectangular stone, always littered with an array of dying flowers, unsmoked cigarettes, empty wine bottles, and impassioned notes. It is inscribed with the Latin “KATA TON DAIMONA EAYTOY”- True to his own spirit. I talk to Jim, I ponder my existence. I’m a romantic like that, and my bravado increases with every sip of the blood-colored Côtés du Rhone. 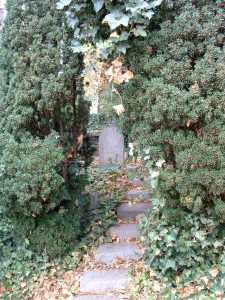 “IS THERE ANYBODY OUT THERE? SHOW YOURSELVES!”

Still with no takers from the underworld, I leave Jim’s side and wander back towards the iron gate along the very high, very thick cement wall that separates this City of the Dead from the City of Lights. Still slightly disappointed in my failed rendezvous with Jim’s spirit, I am ready to commune with some of my living companions at a warm café and knock off the chill that has slowly started creeping along my sides. I put my small white hand on the big metal door handle, and pull. Nothing. I push. I push harder. The giant gate does not budge. It is no use; it is locked. I now see the sign indicating the fermeture of the cemetery at 6 PM.

It is just after sunset on Halloween night, and I am locked inside the largest cemetery in the Paris, along with the spirits of 70,000 dead people I have been taunting and screaming at and commanding to show themselves for the last couple of hours. 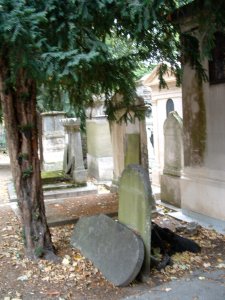 I walk, sort of creep, along the path across to the second gate, surprisingly silent given my previous courageous outbursts. I can’t decide whether it is better to make a mad dash for it, or to slowly try to, what- outcreep the ghosts? It doesn’t matter; I arrive at the second gate and see that it is locked tight, and I know the others will be too. I consider finding a tomb and just hunkering down until daylight comes to save me. Should I try screaming through the gate? Climbing a tree and cheerleading it over the top of the wall? I fear that I may now have forever to ponder my situation, trapped with my ghoulish compatriots here in this land of death. 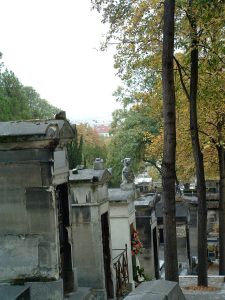 Just then a bright light flashes to my left, outside the gate. A round light, a flashlight, and behind it a hat, a uniform, and to my delight: an armed police officer. I’m saved! I rush over to the gate, French words of praise stumbling over my tongue, the terror obvious in my pie eyes, my breath spilling out in punches. The policier is…whistling? And chuckling? Apparently this happens all the time, he tells me, and calms me down with an array of stories about people getting locked inside. Relieved to not be trapped in Père Lachaise for eternity, I exhale, and laugh. We chat while he calls up the security guard to let me out, and I tell him the (now hilarious) story of me screaming and taunting the ghosts and trying to manifest up dead poets. We laugh, I am released, and we wish each other well for the rest of the night.

“Jim,” he replies, and walks off into the night. 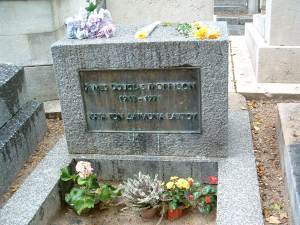 One thought on “An American Poet, Un Policier Parisien”